"It's near-impossible to find anyone in Afghanistan who doesn't believe the US are funding the Taliban: and it's the highly educated Afghan professionals, those employed by ISAF, USAID, international media organizations -- and even advising US diplomats -- who seem the most convinced," reports the Guardian today. "The US has an interest in prolonging the conflict so as to stay in Afghanistan for the long term," said one Afghan. 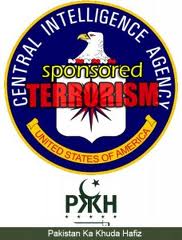 It does not take a lot of research to prove the Taliban — and al-Qaeda — were fabricated by the CIA in league with Pakistani and Saudi Arabian intelligence.

As the Guardian reported, most Afghans know "America's war strategy" is a joke and only the American people are fooled and also fleeced.

For years the corporate media has told us the Taliban fund their insurgency with profits from a huge opium industry. But even Obama's special envoy for Afghanistan and Pakistan, the Bilderberger Richard Holbrooke, admits this is not the case. "In the past there was a kind of feeling that the money all came from drugs in Afghanistan," said Holbrooke last year. "That is simply not true."

In fact, before "everything changed," the Taliban banned opium cultivation in Afghanistan, an effort the corporate media characterized as an effort to run up prices.

However, after the defeat of the Taliban, the drug trade, under the supervision of the CIA, would once again blossom.

"After five years of the U.S. occupation, Afghanistan's drug production had swelled to unprecedented proportions," writes Alfred W. McCoy, a professor of History at the University of Wisconsin-Madison. "In August 2007, the U.N. reported that the country's record opium crop covered almost 500,000 acres, an area larger than all the coca fields in Latin America. From a modest 185 tons at the start of American intervention in 2001, Afghanistan now produced 8,200 tons of opium, a remarkable 53% of the country's GDP and 93% of global heroin supply."

In April, Fox News ran a brazen propaganda piece on Afghanistan's opium trade claiming the U.S. military allows peasants to grow opium out of respect for their cultural traditions.

In fact, the CIA has long used profits from opium to finance its covert operations.

In order to continue the CIA's favorite business enterprise and extend the occupation indefinitely, the U.S. supports its official enemy in Afghanistan. "It is an accepted fact of the military logistics operation in Afghanistan that the US government funds the very forces American troops are fighting," Aram Roston wrote for the Nation on November 11, 2009. "US military officials in Kabul estimate that a minimum of 10 percent of the Pentagon's logistics contracts — hundreds of millions of dollars — consists of payments to insurgents."

Roston "uncovered a tangled web of former military and CIA officials, relatives of the Afghanistan president and Defense Minister and various other shady characters who act as a pipeline from the U.S. Treasury to the Taliban," write Jon Soltz and Richard Allen Smith for Vet Voice.

The occupation of Afghanistan is not about freedom and democracy for the Afghan people. It is about producing heroin and maintaining a military foothold in Asia.

On May 20, a Senate committee approved another $33.5 billion for the wars in Afghanistan and Iraq.

Not only will the money help support an effort to flood American streets with deadly heroin — and thus turn heavy profits for the money launderers on Wall Street — it will also add to the preposterous debt owed to bankers. In the end, we not only pay for the misery of drug addiction (and the war on drugs, including the prison industrial complex) but the effort to reduce America to a nation of slaves indebted for generations to come to a cabal of international bankers.


Real Shocking Crimes caught on camera: "Warning Graphic."
What your mainstream media never tell you: Marvel at the al-Jazeera film crew whipping the crowd to hysteria. This is what most UK/american mainstream media do ; get the crowds TO ACT for the cameras. Ever noticed the STAGED gun shots or in-the-lens chanting? It's all fake, staged propaganda for the liars at Sky/ITN/BBC?CNN/Fox. اسامہ بن لادن ہلاکओसामा बिन लादेन को मार डाला قتل أسامة بن لادن Oussama Ben Laden tué Osama Bin Laden getötet Usama bin Ladin dödas DURBAN, South Africa -- “No high hopes for Durban.” “Binding treaty unlikely.” “No deal this year.” Thus ran the headlines. The profiteering UN bureaucrats here think otherwise. Their plans to establish a world government paid for by the West on the pretext of dealing with the non-problem of “global warming” are now well in hand. As usual, the mainstream media have simply not reported what is in the draft text which the 194 states parties to the UN framework convention on climate change are being asked to approve. Behind the scenes, throughout the year since Cancun, the now-permanent bureaucrats who have made highly-profitable careers out of what they lovingly call “the process” have been beavering away at what is now a 138-page document. Its catchy title is "Ad Hoc Working Group on Long-Term Cooperative Action Under the Convention -- Update of the amalgamation of draft texts in preparation of [one imagines they mean 'for'] a comprehensive and balanced outcome to be presented to the Conference of the Parties for adoption at its seventeenth session: note by the Chair.” In plain English, these are the conclusions the bureaucracy wants.  The contents of this document, turgidly drafted with all the UN's skill at what the former head of its documentation center used to call “transparent impenetrability”, are not just off the wall – they are lunatic. Subscribe to VesInteL World News by Email
Article by DDPSenior at VesInteL posted 3/04/2012 11:06:00 PM